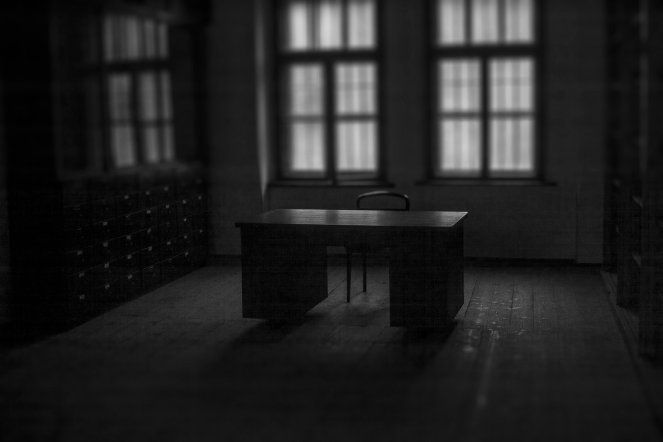 Today we have a short story that I started writing way back in 2006 and finished in 2013. It is one of the few short stories I have written that I feel no desire to expand. I think it fits just right as a short story.

As she stepped into the softly lit room, she couldn’t help but feel apprehensive as her eyes settled on the soft leather couch. The doctor was not yet seated in the nearby matching chair, but she knew he would be momentarily. She refused to refer to him by name. He called it obstinate. She called it necessity.

She slowly paced the room, working her way around the cedar bookcases, ending up behind the large desk next to the window, on the far side of the room from the door. Pulling back the white gauzy curtains, she looked down at the back yard of the facility she had called “home” for six long weeks. To the day.

“Gabrielle, it’s nice to see you.” said a smooth voice from behind her. Her spine stiffened as she turned, catching a glimpse of her gaunt frame in the reflection of the window. The doctor had already seated himself and was leafing through her extensive chart. She made her way stiffly to the couch.

“Take a seat and we’ll get started.” She grimaced and held in the urge to hurl an expletive at him, before she sat rigidly on the far end of the couch. Her stomach turned as he looked up from the papers in his lap, letting his eyes roam freely over her body and end up fixated on her eyes. The crooked smile appeared as always; let the games begin.

“How are you feeling today, Gabrielle?” he asked warmly.

“Just fine?” he mocked. Her face twisted into an ugly grimace,

“Yes. Just. Fine” she bit out through clenched teeth. The doctor leaned back in his chair,

“Come on Gabrielle…” he chided, giving her a disappointed look. Frustrated, she crossed her arms across her chest,

“What is it that you want me to say?” she snarled, with a deliberate edge in her voice. The doctor smiled at her,

“Gabrielle, I only want you to own up to your feelings. That is the only way that I can help you.” She uncrossed her arms quickly, slamming them in the couch beside her with a loud slap; her hospital gown crinkled along with her movements.

“How do I feel?!” she shrieked, “Horrible. Awful. Like I want to die. Like I’m trapped inside my own skin. Is that what you wanted to hear?” Hearing the echo of her own hysterics horrified her. She gasped, her hands flying shakily to her mouth and she sank back against the couch.

“Well I can’t say that I enjoy you yelling at me, but at least you were honest for once.” He said smugly. She cursed at him in her head. She hated when he made her lose control; got under her skin. After staring her down for a moment he spoke, his voice taking on an almost sensual quality,

“How long has it been, Gabrielle?” His singsong voice both infuriated and excited her, leaving her insides quivering.

“How long since what?” she snapped. The doctor’s chuckle rang throughout the room.

“You know exactly what I’m talking about. Why you are here, Gabrielle.” She shook her head violently. She worked so hard to keep the thoughts tucked away; it was the only way to make it manageable.

“No.” she whispered. The doctor leaned forward, inching towards her,

“Come on, Gabrielle. Gabby.” She cringed at the nickname that made it all so much worse, “How long has it been since you felt that sweet drug effect slide over you?”

“One thousand and eight hours, seventeen minutes and a pointless amount of seconds, you son of a bitch!” She exploded. The doctor smiled, getting up from his chair and moving across the room to the window. He turned his back to it leaned back against the windowsill. He crossed his arms and looked over her judgmentally. She wrapped her arms around her midsection and tucked her knees up against her chest.

“Feeling a little hostile today, are we?” he said with a knowing smile, “or is it just… frustration?” He drew the word out like a sensual caress that she felt warm her from her toes up, quickly spreading through her aching body. His eyes roamed over her as he moved behind the couch, placing his hands on the back of the seat on either side of her narrow shoulders. She stiffened, a shiver crawling up her spine; a flush flooding her body. “What about the other one, Gabrielle?” he asked softly. She set her teeth and tried to ignore the heat spreading through her body,

“I don’t know what your talking about.” She said coldly, unwrapping and re-wrapping her arms around her thin midsection nervously. She felt the doctor’s body shift behind her, closer. She could feel the heat from his body on the nape of her neck. She could feel his breath near her ear, tickling and caressing. It made her cringe.

“Don’t touch me.” She was disgusted by the pleading tone of her voice. Moving around the couch with the grace of a predatory cat, he moved toward her.

“How long, Gabrielle” he repeated huskily, placing his hands on either side of her head, against the bookcases. Shaking her head and biting her bottom lip she whimpered,

“How long?” Sighing, she answered piteously, in a small voice,

“Five hundred and four hours and thirty seven minutes.” Laughing callously, he moved his lips next to her ear and breathed,

“What do you think of me?” Blinking hard in confusion she asked,

“What?” Letting go a heavy breath he murmured,

“You hate me, don’t you?” Tears began to sting her eyes and her muscles grew weak with desperation,

“Yet all you want is for me to touch you right now.” Arching her body in an effort to plaster it against his, she softly echoed,

“Yes.” Turning abruptly away from her, he returned to his seat in his chair, picked up her chart and started scribbling away.

“I see that your still having trouble resisting temptation. Let’s explore that.” He said calmly. Crumpling to her knees against the bookcase, she let the tears flow freely.  He got her every time. Every fucking time. She dragged herself up off the floor and slunk to the couch, hating herself for letting her guard down; for letting him break her control.

“Why do you think it is that all of the other patients in your program are improving, and you are still lagging behind, Gabrielle?” Her insides twisted, boiling with anger, and her eyes glazed over with malevolence.

“How the Hell should I know? You’re the head-doctor, not me.” she growled.  The doctor’s silvery laugh glittered through the air,

“Oh Gabrielle, don’t be so naive. You have to take accountability for your own actions. You are a drug addict and a sex addict. You have to come to terms with that.”  He rose from his chair and moved behind the desk, to the window, peering out at the yard below. Revulsion collided with anger and Gabrielle exploded. She flew up from the couch, and in one fluid motion, picked up the arrogantly monogrammed letter opener and leapt over the desk, jamming it into the middle of the doctor’s back. He let out a horrific gasp, crumpling against the window. Gabrielle jumped back, crying out in shock as the evidence of what she had done spread out before her. The doctor turned around gasping and groaning in pain, the blood from his wound soaking the back of his blazer.

“Gab-Gabrielle?” he whispered, squeezing his eyes shut in pain. He slid down onto the floor behind his desk. Gabrielle’s mind raced,

“What have I done?” she whispered. And then her instincts kicked in. Kneeling next to the whimpering doctor’s body, she fished his keys out of his pocket. She ran to the study door and cracked it open, peering out into the stark white hallway.

“Gabrielle, pl-please g-get he-help.” came a stammered whisper from behind the desk. Gabrielle shook her head in an effort to rid those words from her brain and focused on the task at hand: escaping her prison. She slunk through the cold, medical hallways of the institution, hiding around corners from orderlies, and making her way to a side door leading out of the building and off of the grounds. Reaching the door, her hands shaking, she picked through the keys nervously, trying each one, praying the door would unlock before anyone came by. Finally she heard the telltale click and her spirits soared. She pushed the door open and stepped outside into the cool, crisp fall air. She let the door close behind her and took a deep breath: freedom. One relaxing breath of clean air was all she could afford. She needed to figure out a way out of the compound. Guards manned the gate, and she couldn’t exactly sneak out in her hospital garb. The anxiety started to roll through her in tremors.

And then the demon inside her slipped out. She unbuttoned the front of her gown below her breasts and sidled up to the Guard shack. Two middle-aged men in uniform sat inside. She positioned herself in a provocative manner and rapped on the door lightly.  The door swung inward, and before either guard could utter a word, she was climbing into the closest one’s lap and kissing him deeply. Her mind raced as the guard submitted to her briefly, melting into the kiss and responding to her trim body pressed against his own. Part of her screamed to continue, but the other, larger part told her to hit the gate release button and run like the wind. The latter part won and she broke the kiss just long enough to hit the button and race out the door again in a blur. She slipped between the narrow gap in the gates, as they were still opening and took off at a dead run. She ran until it felt like her legs were going to collapse. She had heard sirens about three blocks from the facility, but had ducked into parking lots and slunk behind buildings to evade them.

As her exhausted body came to rest against a dirty brick wall behind a large building, she felt her spirit soar. Folding herself onto the grimy ground she smiled and laughed gleefully at her freedom. She knew her parents would be notified of her absence and no doubt the police were trying to track her down, but for at least one moment, she was her own woman again. Deep down she knew it wouldn’t last, but all that mattered was that breath of fresh air, and the space to stretch her aching limbs.

Her ears picked up sirens again in the distance, and knew that she had nowhere to run, and no energy even if she did have some place to go. In spite of the feeling of impending doom, she relaxed against the wall, smiling at a nearby cat rummaging through the garbage. For just this moment, life was good again.